Get your boots on with coquet nature lover

When I go out into the countryside and see the sun and the green and everything flowering, I say to myself "Yes indeed, all that belongs to me!"
Henri Rousseau

Overnight cooling of surface air can result in a nocturnal temperature inversion that dissipates as the air near the ground warms up. This phenomenon can often be seen at this time of year in the Coquet Valley and makes for an amazing photo. You have to be up early to get your photo though!


A few shots from the hedgerows... 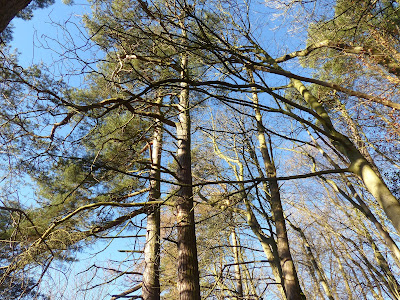 and on the riverbank...

and in the Coquet...

Little grebes too can sometimes be spotted however they are quite shy and often lurk close to the margins of the water. Just when you are ready to take your photo, they tend to dive or disappear into the vegetation!

Although the next photo was actually taken at Wallington, goosanders with their razor sharp beaks, are also a familiar sight on the Coquet. As you can see in the previous photo, the little grebe in the river's turbulent waters is not quite so well defined. Still, I decided to include it as it is quite atmospheric.

Simply the Solway in the southwest of Scotland


The Solway is a region that wildly exceeded my expectations. In fact, I first visited this unspoilt part of Scotland by accident a couple of years ago. The intention had been to spend a day in the Lake District but, as it was absolutely heaving with traffic and tourists, I decided to head back to the M6 and drive north to Gretna Green instead - yes, over the border to Scotland! From Gretna, you head for Dumfries then west to Galloway. What a great decision it was too!
(Keswick in the Lakes to Dumfries by car takes approx 45 minutes - 45 miles/72km)

Unlike the Lakes, the Solway coast is sparsely populated and has few visitors so it's a great location for both wildlife and nature lovers who want to spend a few moments in time away from the everyday hustle and bustle and enjoy the peaceful coastal walks and stunning sunsets.

The photos in this post, with the exception of the greenfinch, were taken on my visit just before last Christmas.

Hedgerows clothed with a rich carpet of lichens 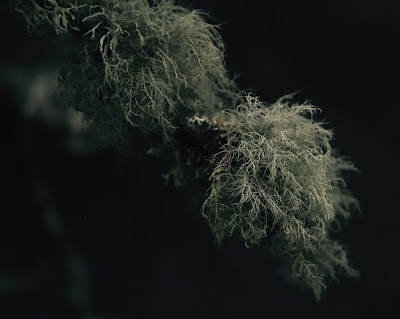 Although some Barnacle geese winter here in the north-east, the majority leave Svalbard (halfway between Norway and the North Pole) in late September/early October and head for Islay and the Solway where they stay until April. The journey is 3,000 km journey and it is reported that they may fly non stop in under three days.

Here are photos of the geese taken at RSPB Mersehead nature reserve. The barnacle geese grazed in the fields and didn't seem to be disturbed by visitors on the nearby footpath until a helicopter flew overhead.

Northumberland is also a destination in winter for pink-footed geese and the photo below (taken on New Years Day) shows part of a flock of over a thousand feeding on fields near Wooler. It is estimated that between 6-12,000 pink foots winter in the county. The main areas also include Lindisfarne and Druridge. If you are a regular reader, you will have seen my post on Lindisfarne (Holy Island) last October.

Here are a couple of birds of prey - also known a raptors. Out of interest, the word 'raptor' has a Latin origin and is derived from the verb 'rapere' meaning to seize or take by force. Not great photos of birds in flight but I was happy to get them in the frame! The geese in the photos above were much easier to take! 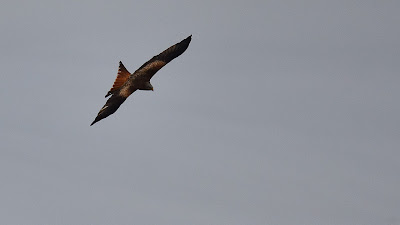 The next three photos are of fulmars on the cliff face at Port Patrick. The word 'fulmar' has has an Old Norse origin - fúll (“foul”) and már (“gull”) - in reference to the foul smelling oil they spit out when disturbed. The second and third photos show a pair greeting and bonding with each other with much head bopping and bills wide open. This is typical behaviour of this grey and white seabird, related to the albatross.

Back on the subject of etymology, the name of the elegant seabird in the next photo can be traced back to french - no surprise there! With its long legs and long slender down-curved bill, the origin of 'curlew' could date back as far as the mid-14th century from Old French courlieu. The french verb 'courir' translates 'to run' and these birds can run fast! 'Lieu' translates to 'place' so it does seem plausible. (13c., Modern French courlis), said to be imitative of the bird's cry but apparently assimilated with corliu 'runner, messenger,'  from corre 'to run') (www.dictionary.com).


At the end of the blog, you will find the poem 'The Horses' by Ted Hughes. He was a great nature lover and many of his poems explored his passion for nature. In The Horses, the curlew is used as a symbol to interrupt the silence of the morning (line 17) as well as to represent the noise of the city in the penultimate line.
Click here to listen to a curlew on the Solway estuary


Sunset on the Solway - Rockcliffe 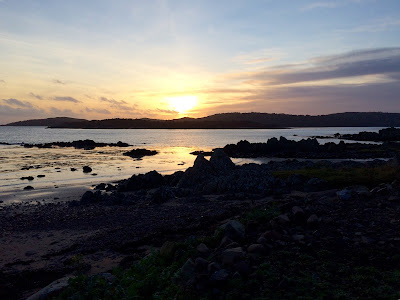 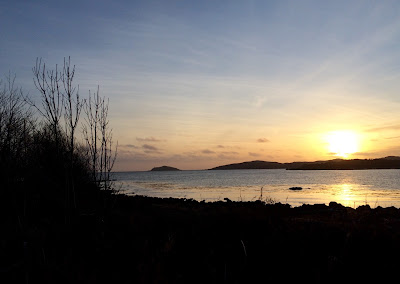 The Horses
by Ted Hughes

I climbed through woods in the hour-before-dawn dark.
Evil air, a frost-making stillness,
Not a leaf, not a bird -
A world cast in frost. I came out above the wood
Where my breath left tortuous statues in the iron light.
But the valleys were draining the darkness
Till the moorline - blackening dregs of the brightening grey -
Halved the sky ahead. And I saw the horses:
Huge in the dense grey - ten together -
Megalith-still. They breathed, making no move,
with draped manes and tilted hind-hooves,
Making no sound.
I passed: not one snorted or jerked its head.
Grey silent fragments
Of a grey silent world.
I listened in emptiness on the moor-ridge.
The curlew's tear turned its edge on the silence.
Slowly detail leafed from the darkness. Then the sun
Orange, red, red erupted
Silently, and splitting to its core tore and flung cloud,
Shook the gulf open, showed blue,
And the big planets hanging -
I turned
Stumbling in the fever of a dream, down towards
The dark woods, from the kindling tops,
And came to the horses.
There, still they stood,
But now steaming and glistening under the flow of light,
Their draped stone manes, their tilted hind-hooves
Stirring under a thaw while all around them
The frost showed its fires. But still they made no sound.
Not one snorted or stamped,
Their hung heads patient as the horizons,
High over valleys in the red levelling rays -
In din of crowded streets, going among the years, the faces,
May I still meet my memory in so lonely a place
Between the streams and the red clouds, hearing the curlews,
Hearing the horizons endure.