With the wind dropping and the sun out, a late afternoon walk at Low Newton by the Sea seemed like a good way to end the weekend. Yes, there was plenty to see with the paths along the clifftops flooded yellow with lesser celandine and cowslips, attracting numerous bees with their delicate egg yolk flowers and pale green stems.


Several seals were swimming close to the shore, gently nudging their heads and noses up to take a quick look around. Up above, streams of gannets could be seen heading back to Bass Rock after a successful fishing outing whilst several low flying cormorants, and one lone shag, headed south - perhaps back to Amble pier where I often take pleasure in counting them. For once, it was possible to identify the shag. With its slender bill and green sheen, it stood out from the cormorants.

Before heading home, a quick look at the flooded field next to Newton Pool proved to be a good decision.  It was actually quite dry and although there weren't that many waders or ducks on it, there were yellow and white wagtails running on the ground foraging for insects on the far side. Having almost given up and ready to head home, a keen birder drew my attention to a large white gull across the field which he confirmed was an Iceland gull. Now I've not seen one of those before so yes, it's a 'first'!

At this time of year, small numbers of Iceland gulls are passing through the north east on migration to Greenland where they breed. Generally they winter in north west Europe (including Iceland) but the bird at Newton Pool probably spent the winter further south in England. I am not sure why they are called 'Iceland' gulls as they don't breed there - unlike the common ringed plover I follow!

Typically I didn't have my camera with me so I had no choice but to use the mobile which wasn't ideal given the bird was several hundred metres away and could only be properly seen through binoculars. The photo below is in its raw state (taken with an iPhone through a telescope) Still, it's good to have some context.... 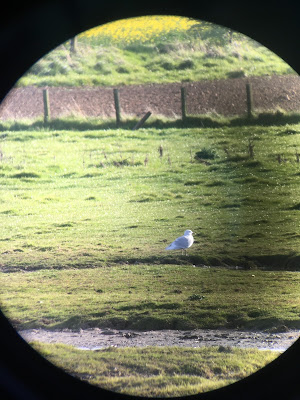 The next photo has been zoomed in and cropped. Sorry the photos aren't great but you can identify it is an Iceland gull with its long white wing tips. You can also see the gull has a kind face unlike Glaucous gulls which are supposed to have angry faces!


To close this post, here are a couple of my favourite wildlife shots. As I didn't manage to get a shot of a seal yesterday, here is one taken off the Northumberland coast last summer. You can read more on my post A trip to Coquet Island.


And here is a close up of a cormorant preening. I think I may have to do a post on 'cormorants and castles' as both are in abundance on the Northumberland coast! Admittedly, this cormorant was taken at the Marine Lake in West Kirby on the Wirral but then again, you can forgive me as that's where, as a child, I probably saw my 'first cormorant'!

With such diverse landscapes and a wonderful array of wildlife, Northumberland is a superb place for nature lovers.  Enjoy!