From beautiful butterflies to Baltic breeders


As you all know, Northumberland is a great place for nature lovers and this post shows that it's not just in the secluded, rural spots you get the best shots. Take a look at the wildlife photos of the converted industrial building and you will see some close ups of breeding kittiwakes which were taken from the fourth floor viewing exterior platform. It was quite amazing as everyone was photographing these seabirds and their chicks, rather than the splendid views up and down the River Tyne! Quite a talking point!

I hope these photos might inspire you to pay us a visit and prove that you don't need to climb dangerous cliffs and have powerful binoculars to get close-up views of wildlife!

... you could find rare butterflies in the far north of the county


The Holy Island of Lindisfarne, situated a few miles off the coast of north Northumberland, is where I spotted a swarm of beautiful rare dark green fritillary butterflies flying over the dune grassland. For once, it was quite easy to get a photograph as they were numerous and settled frequently to collect nectar on the abundant thistles and red clover as seen in these images. 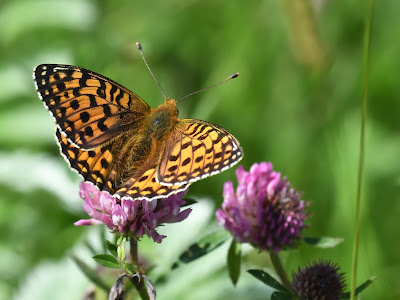 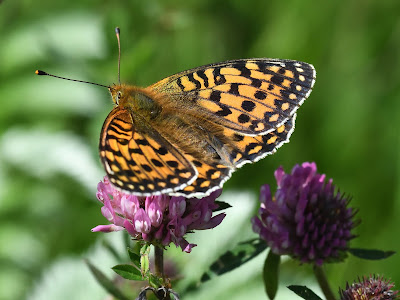 When they are feeding, you can see the underwing markings which are tinged with green. Otherwise, you just tend to notice their upper wings which are bright orange with black spots and markings. 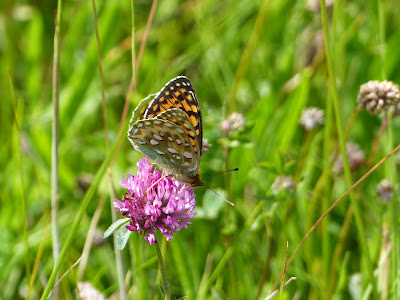 As it was the first time I had seen this species so close, I decided it was the perfect opportunity to take 15 minutes to get counting for this year's 'Big butterfly count' that the Butterfly Conservation is running. Well, I wasn't disappointed with the results - 18 dark green fritillary, 16 burnet moths and 1 red admiral! Sometimes, it's best not to plan these counts as the most carefully prepared plans often go wrong - so, just wait for a sunny moment and off you go!

Here are a couple of photos of burnet moths which were taken in the same location as the fritillary butterflies.

Now for a photo of pirri-pirri bur which is one plant you need to avoid if at all possible! Native to New Zealand, it has now invaded the dunes of Lindisfarne and seems to be colonising fast. No matter what you do, it seems to stick to everything. Despite painstakingly picking it all off before I left, I still managed to find the spines of the burs attached to my socks after they had been through the washing machine cycle! Seriously, it is important to try to brush it all off your clothing as if not, the seeds will spread to wherever you move on to next.

This colourful wildflower attracts many bees as well as butterflies and is named as such as it is said to resemble a snake! According to Coles in Art of Simples "Viper's Bugloss hath its stalks all to be speckled like a snake or viper, and is a most singular remedy against poyson and the sting of scorpions". Mind you, although folklore claims this plant supposedly has medicinal properties, I also read that it can cause liver failure so beware if you are stung by a scorpion! 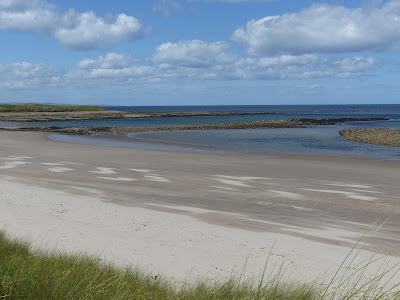 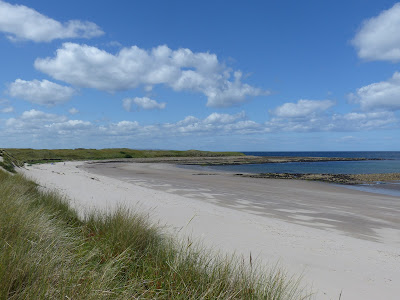 ... oystercatchers breeding on the shingle of the River Coquet

With its source in the remote Cheviot Hills, marking the border between England and Scotland, the Coquet flows through the County of Northumberland, twisting and turning in an easterly direction for forty miles until it finally flows into the North Sea at Amble.


... then on to my garden in the heart of Northumberland

Home is where the birds have devoured the berries, deer have grazed on the bark of the fruit trees, shrews have savoured the strawberries, and numerous pesky unwanted rabbits have munched on the flowers. Now that's not to mention the voles that ate the garden peas! There is also a solitary mole but he is forgiven as, being a ' carnivorous lone mole', he does a good job aerating the lawn, and keeps off my fruit and veg!

Mmmm, do I really want a wildlife garden? Well, yes I do so, rather than get out the traps, I need to remind myself of the inspirational quote by George Santayana's (1863-1952) about the value of appreciating nature.


'the earth has music for those who listen'


... and finally sixty miles south to the Baltic where kittiwakes breed

In the Spring and early Summer, the Baltic becomes home to the world's largest inland colony of breeding kittiwakes. Estimates seem to vary but as many as 700 are thought to breed on ledges on the Northern face of this major international centre for contemporary art. 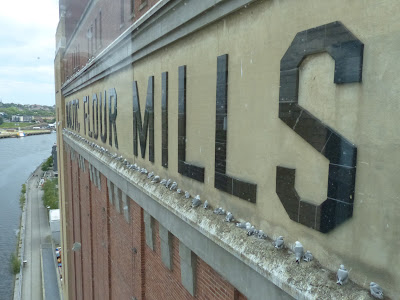 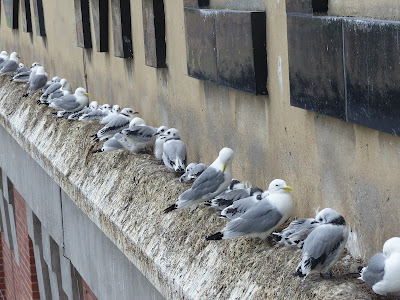 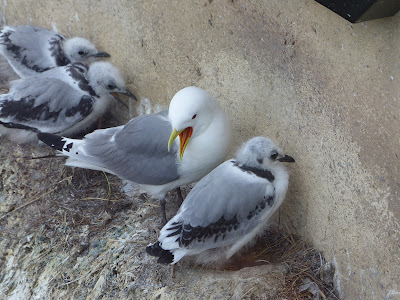 Originally a flour mill, built by Rank Hovis and completed in 1950, this industrial building was converted and reopened as a major international centre for contemporary art in July 2002 called Baltic. During its reconstruction, a temporary tower had to be erected further downstream to house the kittiwakes that had used the narrow ledges since the 1960s to build their nests. The structure (known as Kittiwake Tower) was very successful and within a few weeks, many of the birds had relocated to their new temporary home!

Despite it being said that 'nature is more beautiful than any wonder conceived by humans', I'd certainly recommend a visit to this impressive international arts centre where you can enjoy nature, art and breathtaking views from the glass sided lifts that travel to the top of the building at two metres per second!

Kittiwakes are a protected species that traditionally breed on steep sided sea cliffs. Unlike gulls, kittiwakes don't like our chips and left overs! They feed out at sea so, given that the Baltic is ten miles upstream, they have quite a long journey to travel to catch their diet of fish, shrimps and worms. As they can store food in their crop, the distance doesn't seem to be a problem. In fact, I saw several parent return to their nests and regurgitate food for their chicks.

If you are not familiar with the north-east of England, Gateshead is on the southern bank of the River Tyne, opposite Newcastle. They are joined by seven bridges including the Gateshead Millennium Bridge pictured below. The bridge is for both pedestrians and cyclists and tilts to allow tall ships to pass through.  If you want to see the bridge tilt, you can view tilt times here. 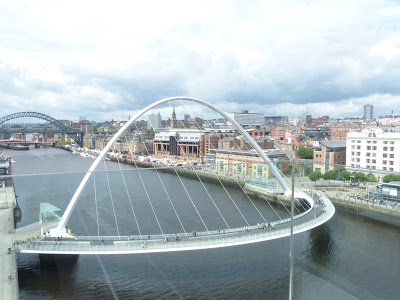 And, if you happen to be the lucky owner of a tall yacht, you can also request a bridge lift but note well that the mast has to be less than 24 metres in height above the waterline or your request will be declined! Notice needs to be given too!

If you are in the region, you can also take the opportunity to visit Sage Gateshead, a music venue, designed by Norman Foster and opened in 2004.

As I didn't manage to get a good shot of the Red Admiral on Holy Island, here is a photo taken in Northumberland last Summer.


If you are planning a visit to this region and would like any more information on, just leave a comment and I'll be happy to get back to you.