Yes, it's that time of year and some waxwings have arrived - perhaps not an invasion.. but sightings of these beautiful birds that brighten up our day have been reported in Northumberland. In fact, two were seen at the local prison last Thursday. It looks as though they might not have got out as they haven't been seen since!!

With a huge population of blackbirds and woodpigeons feasting on the hawthorn and rowan berries in my garden, the waxwings will need to be quick! The photo above was taken from my living room window a few years back but somehow, I don't think I will be getting another garden shot this winter.

At this time of year, bramblings are usually found in the countryside eating beechmast but this one appeared on the feeder in my garden on November 7th. I don't normally see them until Christmas at the earliest. Perhaps it was the same bird that visited in March of this year? Well, you never know!


This bullfinch came down to the feeder last weekend and enjoyed the sunflower seeds. I often see pairs in the spring as they spend a lot of time in the cherry trees at the top of the garden but over the summer months, they haven't been around. They could however be seen in the scrub along the path by the river Coquet in Rothbury and in woodlands further up the valley. Wallington Hall, owned by the National Trust, is also a good place to find this seed and bud loving finch as the habitat there is very suitable. If you are visiting this region, Wallington is definitely worth a visit with over 13,000 acres of woodland and moorland to explore!

I hadn't realised that until quite recently, it was legal to trap and kill bullfinches as pests. Even now, it is still permitted to kill them under licence under certain circumstances. And yes, I'm not too happy about that... 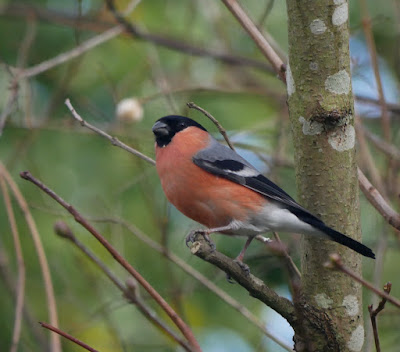 Siskins tend to breed in woodlands and forestry plantations further up the Coquetdale valley but now that there is less natural food about, they are coming to the garden feeders for tasty sunflower seeds. 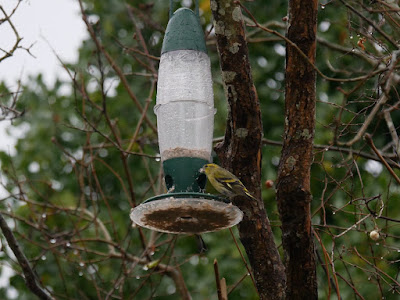 Here we have a dark-billed first winter blackbird - but... is it Scandinavian or British? I took this photo last month on Holy Island which is just off the coast of Northumberland. 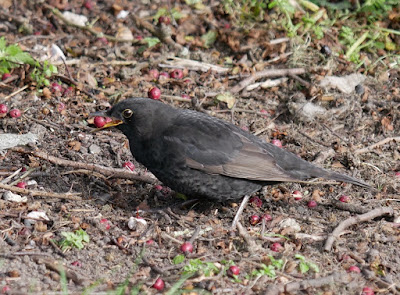 There is a fair bit of scepticism about being able to identify Scandinavian blackbirds with dark beaks. First year male Scandinavian birds do however acquire yellow beaks later in the year than the British birds. As they tend to start breeding later in the spring for climatic reasons, perhaps this is why their beaks remain darker for longer?  What I can confirm is that a huge influx of dark beaked blackbirds arrived on the Northumberland coast last month and they are now turning up further inland in our gardens. So, perhaps this one is a migrant after all - maybe one I saw in Alnmouth or on Holy Island where there were numerous birds that seemed to have no fear of humans, possibly due to fatigue after crossing the North Sea.

Although toads are fairly common in and around the pond in my garden, it's not often I find one amongst the herbs or on the mossy wall by my back door. Yes, we both had quite a fright! 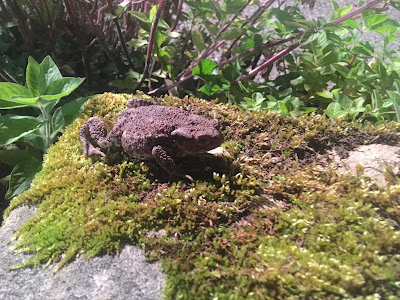 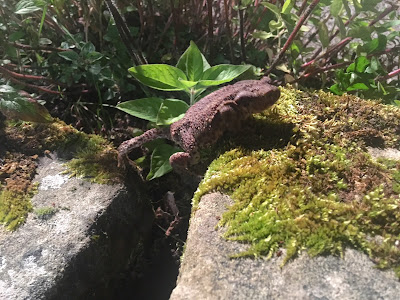 In winter, red-necked grebes head to the UK from colder regions in northern Europe, such as Russia and can be found on the sea off the east coast of  England. The bird pictured below paid a visit to a pool in Linton, Northumberland and happily stayed for a fortnight. The last reported sighting was on 8th November so it looks as though it has moved on now. 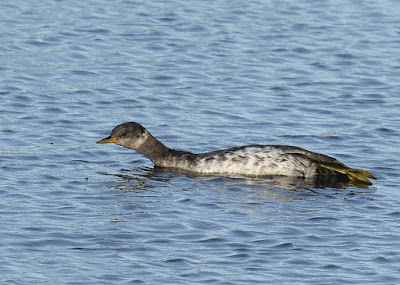 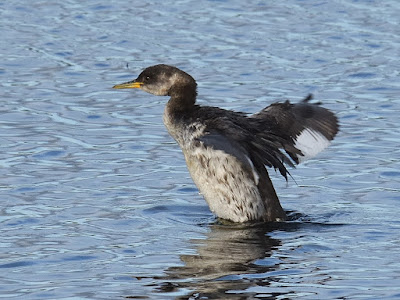 Little grebes are a much more common sight in Northumberland and can often be spotted on the pools at Wallington and the river Coquet in Rothbury.  I have also seen many in the estuary of the Coquet at Warkworth.


In January this year, I spotted some Slavonian grebes on the Coquet at Warkworth in Northumberland. They can be found around the coasts of the UK between October and March however I have to admit it is not a species I come across very often. I do have a photo of a Slavonian grebe, taken at Gullane Bay on the east coast of Scotland. Hopefully, I will be able to find it and include it in this blog post!

Yes, here it is - it's not great a great shot but I think you will like the photo of Gullane Bay which I decided to include too. 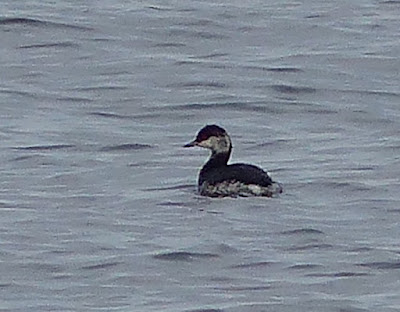 From Gullane Bay you can walk to the beautiful nature reserve of Aberlady Bay. There is a circular walk that heads through the reserve, taking you across paths, dunes and sandy beaches. In fact, you can start at either point and at Gullane, there is a large car park and public conveniences which is worth knowing. 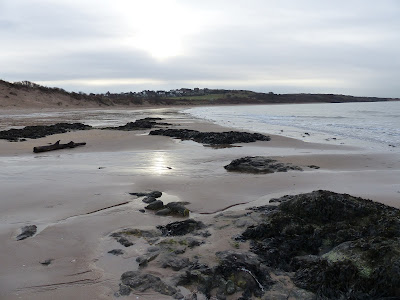 Great crested grebes are a favourite of mine. They are very graceful with their long necks and bills. In the summer, they have beautiful reddish-orange crests with black tips. Although they are resident in the north-east of England, I find it much easier to spot them on gravel pits from the carriages of the East Coast Main Line train when I am travelling to London! If you are in London, head to Hyde Park as there are several families there that have bred successfully. They hang out near the boats you can hire.

Here are two of my favourite photos of great crested grebes, taken on Lake Maggiore in Switzerland. The parents carry their babies on their backs and you can see them in the photos with their black and white stripes. 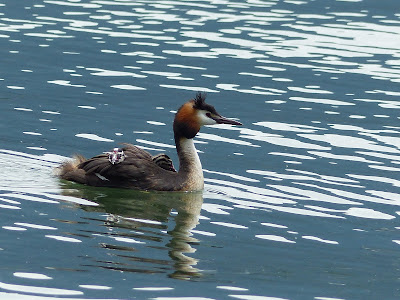 
Yes, she's back safe and sound!

Finally, here are some recent photos of the common ringed plover I have been tracking for a few years. Once again, I spotted it in its usual location by the octopus fish market in Santa Luzia, Portugal. If you follow my blog, you will recall that this bird was bred in Iceland and rung as a chick in Sandasandar, Iceland in May 2010.

Santa Luzia, on the Ria Formosa, seems to be the plover's favourite wintering location and it has now been seen on the sea shore there on consecutive years since 2013. 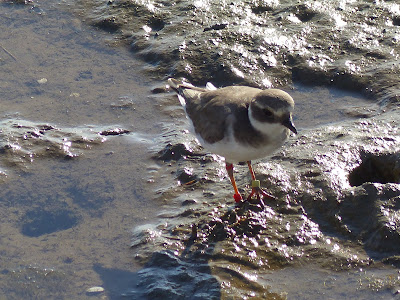 Here is an update of the sightings of this common ringed plover which the University of Iceland kindly sent me. Sorry it isn't very clear.
If you would like a pdf, just let me know and I can email it to you. 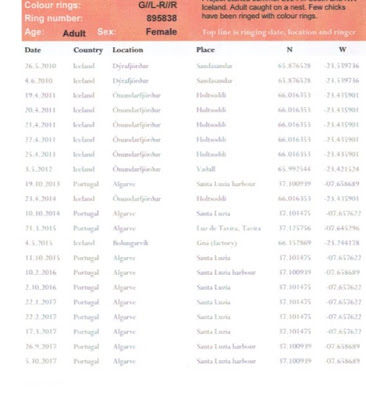 Well, that's it for today... if you've seen any waxwings or had any interesting birds in your garden, I am all ears - just drop me a note in the comments!