With a bit of luck, I'll be eating tapas in a working fishing village in Spain by the time you read this. The good news is that I hope to put together a wildlife post 'on location' in the autumn - however the bad news is that this post should really be called 'few words friday' as there's been little time to research bird behaviour, birdsong, poems, quotes, lyrics and all those extra bits I like to get my teeth into.

Anyhow, I've put together a collection of photos to 'whet your appetite' so to speak!  Well, I'm applying the 'less is more' philosophy so you should find this post focussed on food and photos!
﻿

The photo below was also taken at Newton Pool in Northumberland. It is quite unusual to see a meadow pipit feeding in water as they are usually seen on grassland and dunes.
﻿
﻿﻿
The next photo was taken on coastal dunes (see post 'A walk at Beadnell Bay' ) which is a more typical habitat.


There are a lot of dippers on Northumberland's Coquet as the river's fast-flowing waters provide an ideal habitat for these small, stumpy looking aquatic birds with their wonderful white fronts.  They are quite shy and very difficult to photograph as they don't usually stay still for long! In no time, they jump off their perches and swim underwater, hunting for invertebrates, shrimps and small fish.


in the garden - you don't have to go far to see wildlife!

When you start to find purple poo and undigested berry seeds all around your garden, you know that the soft fruit plants, that you have carefully cultivated for months, are ripe and ready for harvesting before the birds, voles and field mice get to them!

Of course, it also means that Autumn is almost here.  Ummm, I hear my fellow northern readers thinking, "we've not had much of a summer yet and the tomatoes in the greenhouse are still green...."  Well, yes, mine are too - just take a peep at the photo on the 'homegrown' tab. I don't actually mind the wildlife helping themselves to the fruit in the garden - I'm just not so keen on them popping into the greenhouse so frequently for a bite and a nibble - and they do - the evidence is there to be seen with cherry stones in the grow bags, in the plant pots and even finely balanced on the vine!


back on the coast, let's see 'what's on the menu today?'

Preferring chips, the gulls below are not impressed by a Mediterranean diet!

To close this post, I thought I would share with you my favourite photo of the month
﻿

Let's start by saying that if you are a nature lover but not that keen on boat trips - especially on choppy seas - this is the sort of excursion you need to take. Yes, it's one of those magical cruises where there is so much to see in such a short space of time and, at just £8.00, it won't break the bank!  Now, that suits me fine because there's nothing worse than feeling nauseous on the turbulent waters whilst wondering whether the vessel you are in is actually seaworthy... Squandering a small fortune lolling about in the North Sea when there isn't even a seagull in sight is not my thing and certainly doesn't float my boat! Excuse the pun!

The trip to Coquet Island leaves from Amble Harbour and takes about an hour in all. If the sea state is bad, the cruises don't run. Mind you, that isn't to say that if you do sail, you won't hit the odd heavy shower as I did! So, make sure you pack a waterproof and have your camera at the ready as, in no time at all, puffins will be skimming across the blue-green waves and the inquisitive grey seals will be swimming towards you. As these beautiful mammals tend to stop and stare, there will be lots of great photo opportunities.

Coquet Island is an important bird sanctuary and home to thousands of migrating seabirds, including puffins and terns. In addition to its designation by Natural England as a site of special scientific interest (SSSI), it is also a special protection area (SPA) under European Law. The island is occupied by RSPB wardens during the breeding season in spring and summer but, other than that, there is no access. So, if you want a close-up view, you have no choice but to take a boat trip around the island.


For history lovers, Coquet Island has a lot to offer with the remains of a monastic cell founded in 684 AD, and a Benedictine monastery foundation dating from before 1125 on the island. The monastery was dissolved in 1539 during the reign of Henry VIII. The term 'cell' is used to describe a very small settlement - sometimes with just one monk. The buildings and monuments are protected by National Heritage legislation due to their national importance in England.

The lighthouse pictured below was rebuilt in 1841 to incorporate the remains of a medieval tower to the new lighthouse tower, and include the monastic cell in the complex.


Due to its remote location, Coquet Island was probably seen to be an ideal place for monks to concentrate on their religious duties without distraction. The earliest documentary reference goes back to 684 AD, when St Cuthbert met Elfleda, sister of King Egfrith on Coquet Island. The documentation signals that the lighthouse and attached buildings were "almost certainly the site of a Celtic monastery" (Historic England).

The first keeper of the lighthouse was William Darling, elder brother of Grace Darling. Now, I'm sure you will have heard of this Victorian heroine, famous for helping rescue survivors from the shipwrecked 'Forfarshire' in 1838.

The Northumberland coast is an important habitat for grey seals and it has been reported that there can be as many as 600 at Coquet Island in early summer. They can often be spotted loafing around the island and during good weather, they can be seen basking on the rocks at low tide.

I suggest you take a break here and listen to this recording of Seal Lullaby.
Make sure you click on stop at the end of the track which lasts 4 mins.


Oh! Hush thee, my baby, the night is behind us,
And black are the waters that sparkled so green.
The moon, o’er the combers, looks downward to find us,
At rest in the hollows that rustle between.
Where billow meets billow, then soft be thy pillow,
Oh weary wee flipperling, curl at thy ease!
The storm shall not wake thee, nor shark overtake thee,
Asleep in the arms of the slow swinging seas! 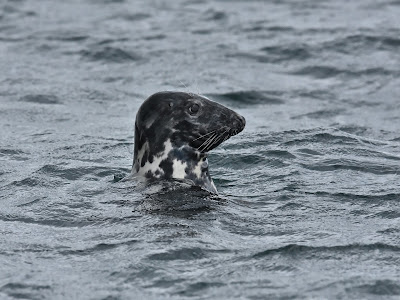 It is estimated that over 30,000 puffins arrive to breed on the island in early spring. They nest in burrows and consume a diet of fish - mainly sand eels.  With such a large population, you are guaranteed a sighting of these colourful birds with their clown-like bills until about the middle of August when they head back out to sea.
﻿ 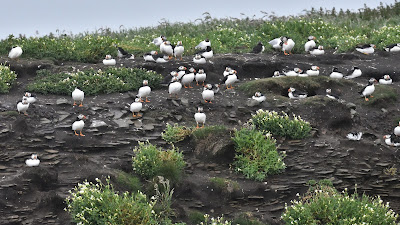 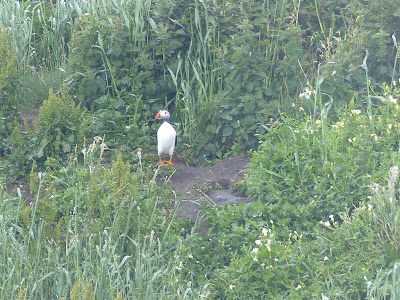 I know I often mention 'terns' in my posts but I suppose that is because of their importance in the Coquet region and not because I deliberately go out looking for them! What is special about Coquet Island is that it one of the few places in the UK where you can find roseate terns; in fact, the majority of the UK population (possibly 90%) breed here. This species almost became extinct during the 19th century and is currently identified as a conservation priority.

It can be very difficult to recognize different members of the tern family however, if you are lucky enough to spot a roseate tern, you will be able to confirm its identification by its pale wings, long tail-streamers and black beaks which have a reddish base during the breeding season. As we can only see these birds in the summer, if you get a close-up view, you will also notice the pinkish tinge to their bellies. Yes, I hear you thinking 'that's why they are known as rosys'!  I would also add that the captain and his mate are great guides as they are very knowledgeable and eager to answer any questions you may have.

In 2000, the RSPB created what is called 'roseate tern terrace' with nest boxes to protect the chicks from bad weather and predators, including gulls. Last year, 111 pairs were counted in the colony, the highest in since the mid-1970's. After breeding here, they head back south to spend the winter off the coast of Africa.

Despite its description, adult gulls have chocolatey-brown heads in summer and a white head the rest of the year.﻿﻿﻿ 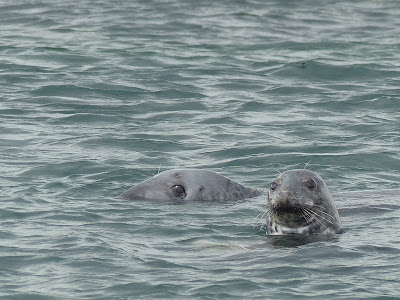 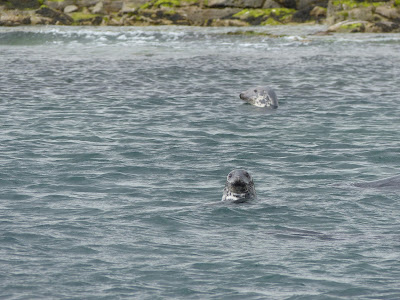 Out of interest, one of the largest colonies of grey seals in the UK can be found approximately twenty miles further up the Northumberland coast on the Farne Islands. The National Trust estimate the grey seal population to be in excess of 5,000 with over a thousand pups born in the autumn.

He’s thinking: “Will that stump
Stay a stump just while I dive?” He dives.

He sheds everything from his tail end
Except fish-action, becomes fish,

Disappears from bird,
Dissolving himself

Into fish, so dissolving fish naturally
Into himself. Re-emerges, gorged,

Himself as he was, and escapes me.
Leaves me high and dry in my space-armour,

A deep-sea diver in two inches of water.

The Cormorant by Ted Hughes (extract)


Cormorant on the derelict pier at Amble harbour - a favourite spot﻿﻿
﻿
﻿

Yes, it was a good day and an excursion I can recommend!