Surprise surprise!  It's misty on this mid-September day here on Lindisfarne yet in Coquetdale, the locals are basking in the glorious sunshine as an unexpected heatwave sweeps northwards up the country! The north-east coastline does seems to suffer more from these sea fogs (or sea frets as known up here) than the rest of the country so, with this pearly light, don't expect to be seeing too many sharp coastal shots... Being an amateur photographer, I tend to use my iPhone or the camera set to automatic mode - no messing about with shutter speeds as, with the wildlife being 'wild', there's a good chance the bird or beast will have moved on before I've adjusted the settings!

We all know that every sailor has a tale or two about something bad that has happened to them, so for some of my readers, who I know don't like boat trips, a visit to Lindisfarne - also known as Holy Island - makes for a great island trip as it is reached by a causeway. Although accessible by bus, car, bike or foot, the journey can be perilous if you ignore the tides so you are warned!

(If you take the bus, you need route 477 that runs from Berwick station or you can connect with a bus at Beal which is on the mainland, fairly close to the causeway.)


"As the tide ebbs and flows,
this place is surrounded by sea twice a day like an island,
and twice a day the sand dries and joins it to the mainland."

Bede, also known as Saint Bede and The Venerable Bede (c.673-753), was a great scholar and teacher in the Kingdom of Northumbria. Although he lived in a monastery from the age of seven, his writings were not confined to Christianity. He was particularly interested in nature and how the moon influenced the tides and calculating the time.

Yes, this island is steeped in history but as this blog is primarily for nature lovers, I think I better stop now before you click into another site!  It was a real murky day when I visited the island but strangely enough, I was happy with the way the photos turned out - rather eerie but in a romantic sort of way... Hope you enjoy the post.


﻿
﻿
Despite numerous warnings about the dangers of being stranded by incoming tides, the RNLI are frequently called out to rescue those who have ignored the warnings. Local parish registers document deaths of people crossing the sands going back several centuries - well before there was a causeway for vehicles. Tides are caused by gravitational pull of the moon and the sun - surely one of the most reliable phenomena in the world - so it's amazing to think that so many people drive straight into the north sea, trying to beat the tide. Madness!

A stranded Swiss family were saved earlier this year - perhaps they could be forgiven if they weren't familiar with the language and, with their county being land-locked, the occupants might not have been aware of the dangers of this tidal island. Thoughtfully, they handed over a generous donation which I am certain the RNLI appreciated as the cost of mounting a rescue is quite considerable..

For nature lovers, there's plenty on offer here all year round. The stunning coastline, sand dunes, saltmarshes and mudflats are home to a variety of wildlife and it's a great place for birdwatching. In 1992, Lindisfarne was designated as a special protection area (SPA) under European Law. It's not just Holy Island which is covered but the mainland coast and intertidal area too. This designation protects threatened and vulnerable birds as well as important migrants.

Autumn is a great time to pay a visit as there's a good chance you might see migrants such as wheatears and flycatchers passing through, or perhaps birds that spend winter on the reserve such as Brent geese and bar-tailed godwits. Lindisfarne is also a site of special scientific interest (SSSI) given its richness of plants, birds and diverse habitats.

The pair of obelisks in the next photo are positioned on the south side of the entrance to the harbour. It is said that when the beacons are lined up on a bearing of 260°, sailors can enter safely. There seems to be some discussion around the exact year they were built but it was back in the 1800's.

Apologies once again but going back to my history lovers, I have to say that Lindisfarne is a real gem with records going as far back as the 6th century. Saint Aidan, the island's first abbot and bishop, founded the monastery in 635. This Anglo-Saxon monastery is now the site of the 12th century priory where The Lindisfarne Gospels were written.  Despite a long campaign to return these manuscripts to the north-east, they remain on display in London at the British Museum. The 16th century castle in the photo below, was refurbished by Lutyens in the Arts and Crafts style in 1901 and is now maintained by the National Trust. Well worth a visit.

The castle is very popular in the summer months however, as you continue your walk around the island, it won't be long until you are alone again. The photo of the young starling below was taken in the walled garden at Pilgrims. The owner of this café is obsessed with coffee and, according to his website, sources the best quality beans from Fairtrade farms. Yes, a great cup of coffee and I can recommend the paninis too!

Lindisfarne is also described as 'a botanist's dream' with many flowering plants and eleven species of orchid - one being the Lindisfarne helleborine which can only found on Holy Island.

The photos below are of the tiny walled garden designed by Gertrude Jekyll in 1911. As you meander through the pathways, you will see how it is broken into long borders, filled with scented roses, bright perennials, colourful annuals and fragrant herbs that perfume the air, attracting insects and butterflies that flutter across in their search for nectar. The eastern border contains fruit trees and is used to grow vegetables. 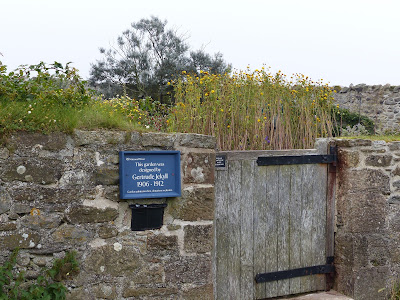 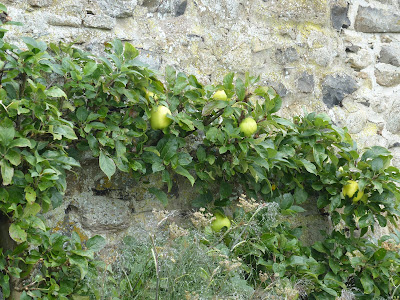 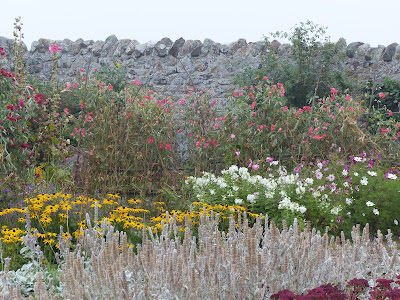 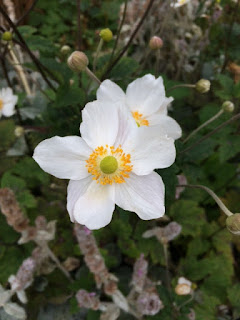 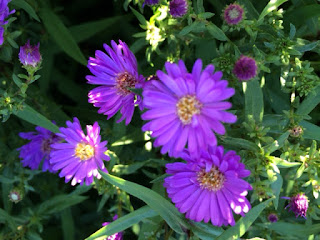 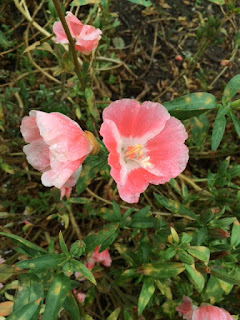 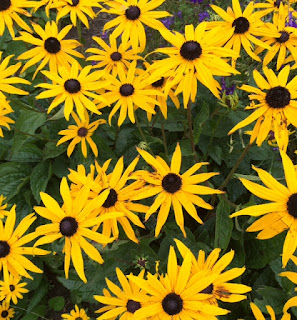 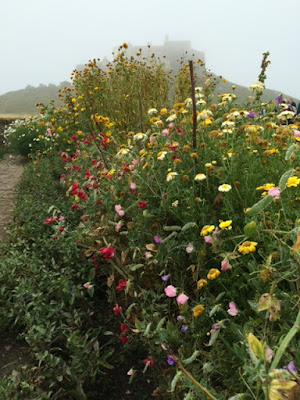 going back to the shore and the wildlife.... 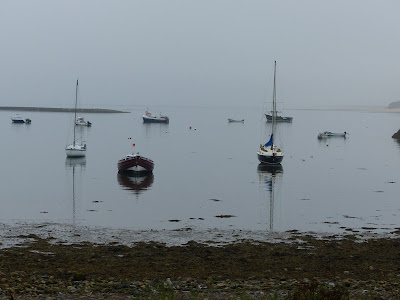 and along the two lonnens....

There are two - the 'straight' and the 'crooked'. In case you are wondering, in the local dialect, a 'lonnen' is another word for a lane or track. It isn't a word that is often spoken but you do still come across it in street names across the north-east of England. 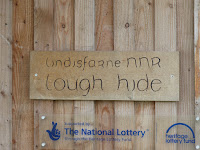 (Fr-pluvier doré   D-goldregenpfeifer)
And now, with the tide coming in fast, it's time to end this post. Will definitely have to plan another visit to take photos of the numerous birds and flowers I didn't get a chance to take this time. Maybe I will be luckier with the weather?
﻿
﻿
As I'm sure you will know, 'Lindisfarne' is also the name of a successful rock band from Newcastle upon Tyne. Although, one of their top selling albums, 'Fog on the Tyne' springs to mind, their single 'Run for Home' somehow seems more appropriate here!
Click on the link below if you would like to listen. Enjoy!
Track 'Run for Home' 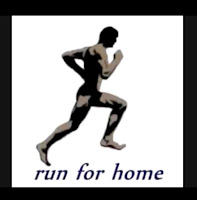