Bringing you the beauty of the bog

On a recent trip to Carlisle, I thought I would take the opportunity to visit the the southern shore of the Solway in Cumbria. The Solway Plain is a great place to visit if you are in the Lake District and you will find this northern stretch much quieter than the major tourist attractions of Windermere, Keswick and William Wordsworth's first home near Grasmere.

Following a meander along the coast listening to the cries of curlews and oystercatchers, I decided to pay a visit to RSPB Campfield Marsh to take a walk along the boardwalk across Bowness Common. Well, after all, it is August, and the wintering flocks of geese which this reserve is famous for, had certainly not arrived!

Bogs are often considered to be rather dull, barren, wet and swamp-like - in fact a place to avoid for fear of drowning... Of course, there are potential dangers but with the boardwalk at this RSPB site, my perception certainly changed as, from this safe path, the beauty of the bog was clear to see.

The plants in the next two photos are both members of the sedge family. The first photo is of cotton grass which is common in Northumberland. For once, the wind enhanced my photo which I'm really pleased with and certainly makes a change! 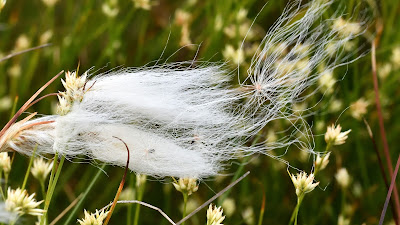 This next photo is of white beak sedge, a species quite rare in Northumberland. On the Solway however, it was one of the most abundant plants to be found on the bog.

Peat bogs form when the rate of decomposition of vegetation is slowed down due to waterlogged conditions which leads to plant remains building up. Peat bogs typically grow slowly - in fact less than one millimetre a year, but over thousands of years this builds up into a layer several metres thick. Now, how amazing is that!

The most important peat-forming plants are various species of Sphagnum mosses. These are very unusual plants which can soak up water like a sponge, holding it in specially adapted cells. They are also very resistant to decay, and have anti-microbial properties. This led to the use of Sphagnum as a wound dressing in the first world war. Unfortunately the water retaining properties of Sphagnum moss also made it useful for hanging baskets, while peat has been used as a soil conditioner by gardeners for many years, adding organic matter and improving the structure of clay soils.
The moss in the above photo grows in the wettest part of the bog, submerged in pools. It is sometimes known as the 'drowned kitten' sphagnum because of its slighty shaggy appearance.

With its distinctive reddish colour, the moss in the next photo is characteristic of slightly drier parts of the bog surface.

Peat has also been burnt as a fuel in the west of Scotland and particularly Ireland. This has led to the loss of many bogs through commercial exploitation. However, intact peat bogs are now recognised as very valuable habitats, and those that remain are protected under UK and European law. With their important stores of carbon, bogs play a part in regulating global CO2 levels and combat climate change.

The bog featured in this blog post at Campfield Marsh forms part of South Solway Mosses Special Area of Conservation, and is one of the largest raised bogs remaining in the UK. 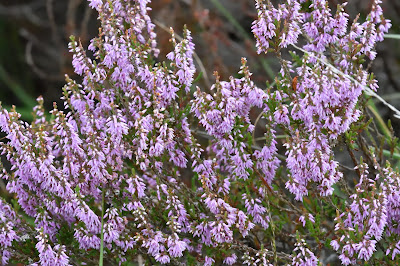 Heather grows on drier parts of the bog, but another member of the heather family is much more tolerant of wetter conditions – cross-leaved heath.  This starts to flower a little earlier than heather, and can be recognised by its hairy stems and leaves which form a whorl, grouped in four – forming a series of crosses up the stem.


One of the insects which specialise in bog habitats is the black darter dragonfly.  They breed in acidic bog pools. Eggs are laid in summer then overwinter in the pools, and hatch the following spring. The larvae develop very quickly, emerging as adults by June. They are on the wing from June to October. The male is the only British dragonfly which is all black; the female pictured here looks very different – it has a yellow abdomen with black markings, and a brown thorax. 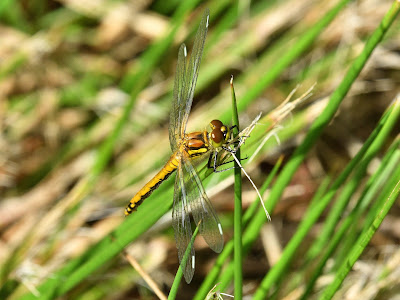 Near the edge of the bog there was a flooded forest of what had been downy birch trees.  Water levels will have been raised in order to help preserve the bog vegetation. 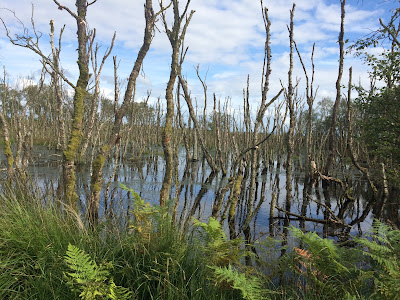 The decaying trees are now home to some large bracket fungi, which feed on dead wood. 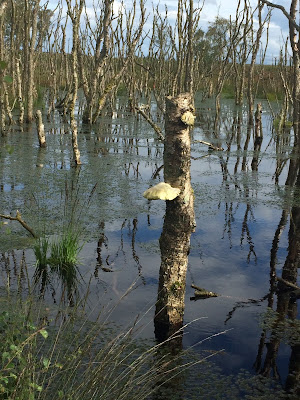 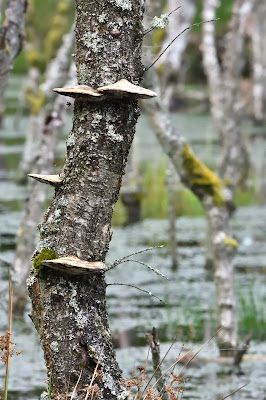 Around the edge of the bog, there were hedgerows and drier fields which is where you will find flocks of geese in winter. Hedgerow flowers included the common ragwort, which was being visited by this hoverfly.
This is also known as the common drone-fly, so-called because they mimic the appearance of male hive bees (drones).  Unlike the black darter dragonfly, they are not at all fussy about where they grow up – the larvae, called ‘rat-tailed maggots’, can happily live in polluted, organically enriched water around manure heaps.


I didn't manage to spot a green-veined white when I did the butterfly count but at least I finally have a decent photo. I find it really difficult to take photos of these beautiful creatures as they are constantly moving from flower to flower in search of sweet nectar! 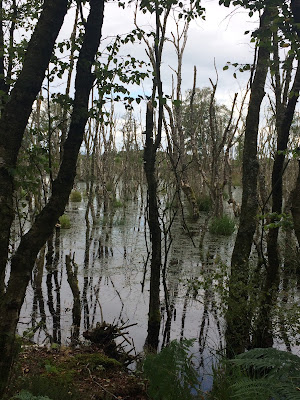 I hope you enjoyed the post and that perhaps you too will get the opportunity to visit this very special habitat!

And don't forget, next year when you are off to buy a liner for your hanging basket, please consider an environmentally friendly alternative such as coconut fibre or coir. You can even use dried leaves or leaf compost from your garden. We need to protect our valuable bogs so, remember, sphagnum gathered from the wild is a big no-no! 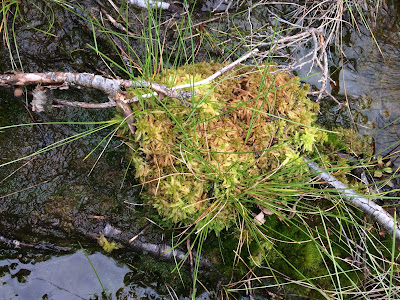 Thank you for visiting my blog - hope to see you next time!

Posted by Coquetnaturelover at 23:34:00 No comments: