Northumberland is probably one of the least likely places to see a bee-eater but, with the storm Ophelia lashing the country, one of these beautiful birds ended up on our awesome coast a couple of weeks ago. In fact, two European bee-eaters were spotted on the 15th October, one of which stayed in the area for a week! The last reported sighting was on the 22nd which is the day the southerly winds changed to W-N-W. Perhaps it was an opportunity to get on its way to the continent.


The bee-eater moved between Druridge Pools and East Chevington to the north. I first saw it sitting on a fence in the pasture land north of Druridge Pools. It then took off, flying high in the air before settling much closer to the welcoming crowd, next to the outlet ditch leading from the largest pool to the sea.  We watched its gliding flight numerous times, each time returning to the same perch - rather like a fly-catcher. The bee-eater appeared to like hunting over the ditch, perhaps because there were still some late autumn damselflies and dragonflies in flight. There certainly weren't many bees about but this particular bird spent a lot of time hunting for food, over the ditch and in between the pools, so hopefully it was able to refuel before continuing its journey to warmer southerly climes.


Late visitors to the garden - Butterflies

The late flowering plants such as this echinacea and white buddleja provided a late nectar source in the garden for butterlies such as the Peacock and Red Admiral below. 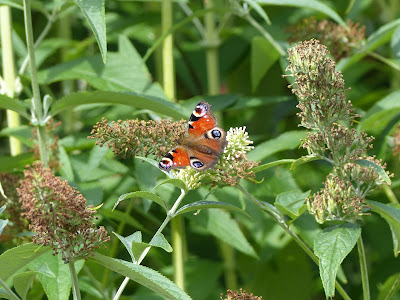 This species below (Speckled Wood) is often found in woodlands but can also be spotted in hedgerows and shady spots in the garden. This is especially the case, early and late in the year, when there are less aphids about. Over the last decade or so, their range has expanded northwards in a direct response to impacts on climate change so now we can enjoy spotting them in Northumberland.


I read the following interesting snippet on the North East England branch of the Butterfly Conservation website. It doesn't give any reasons but it would make interesting research.


"The Comma, for example, was common in the nineteenth century but was then extinct in the region for much of the twentieth century before returning in the 1990s"


More from the garden - but this time edible!

The veg didn't do too well this year, largely due to the wildlife in the garden. The deer may be sweet to see but they munch through the fruit and veg as if there were no tomorrow! Luckily, the deer don't attempt to enter the greenhouse so the vine has produced a good supply of grapes. 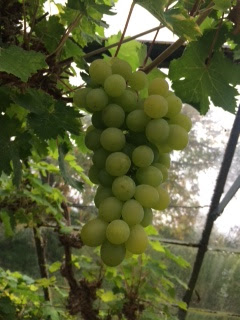 The lemon tree has quite a few fruits which are steadily ripening and should be ready for New Years Day, providing they don't dropoff. 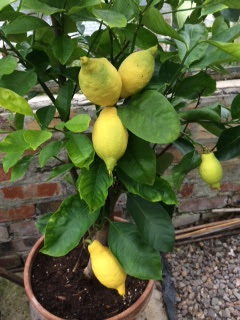 Although the figs weren't particularly large this year, they did ripen and were quite scrumptious. The tree has recently produced a lot more fruit but, at this time of year, you need to remove them.... Well, that's what Monty says!
I have the 'Brown Turkey' variety which is reliable - especially as it is planted in a large pot in the greenhouse so has a little winter warmth and protection from the elements. 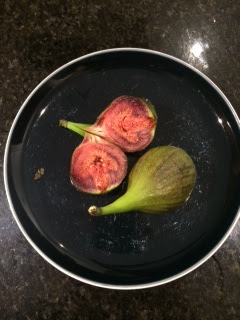 The Victoria plum tree I planted in the orchard a few years ago is now starting to produce fruit. This spring, the tree had quite a lot of blossom but, despite a very mild winter, there was a late frost which caused a lot of the blossom to drop. 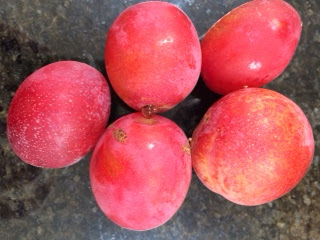 Swallows tend to breed quite late into the season compared to most birds. These four fellas were sitting in their nest, just above the public WC at Alnmouth station (27/08).  Now, I'm quite used to seeing late trains there but it's the first time I've seen such a late brood of swallows!  Fortunately, when I was at the station a few days later, they had fledged. Hopefully they were strong enough to migrate south as somehow, I don't think they will be happy on our chilly eastern coast this winter!

Posted by Coquetnaturelover at 23:43:00 No comments: