Head over heels in Hokkaido


I've just returned from the most amazing holiday in Japan and thought I would share some photos of wonderful wildlife encounters.

Given that only on two occasions in my life have I ever ventured out of Europe, the trip was really special! To be accurate, perhaps I should say 'one' occasion as my holiday in La Réunion ten years ago should probably not be included as, although located in the Indian Ocean, this french territory is part of the European Union - in fact it is the outermost territory. 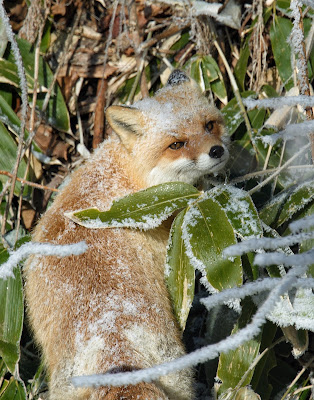 Tsurui
In the mid 20th Century, it was thought that red-crowned cranes were extinct in Japan however small numbers were discovered breeding in the marsh land at Kushiro. Conservation measures have increased the population and they are given food daily in Winter at the Ito-Tancho centre which is in Tsurui.

The cranes roost on the Otowa river a few miles away and at dawn they fly back to the fields around Tsurui. (see photos at end of blog) They were quite difficult to photograph as they were several hundred metres from the bridge but in the fields you can get very close to them - especially where they are fed. 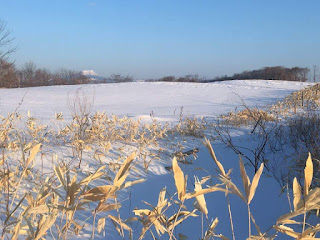 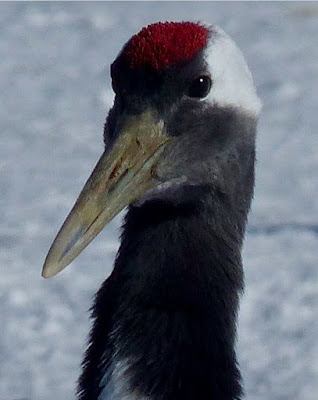 I believe cranes pair for life and you can see their dancing courtship display in the fields. 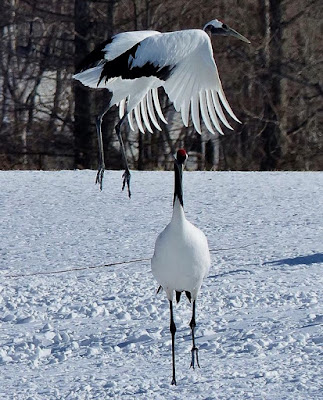 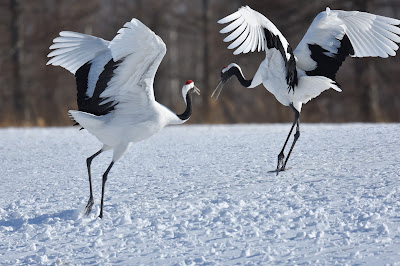 The ability to simplify means to eliminate the unnecessary so that the necessary may speak.
Read more at: https://www.brainyquote.com/quotes/hans_hofmann_107805

Here is a quote by Hans Hofmann which can certainly be said about the excellent accommodation with Sachiko at Heart'n Tree in Tsurui. 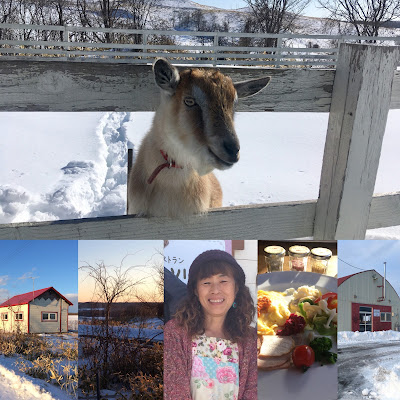 Great accommodation with Sachiko and her super friendly staff and delicious home made food including bread, cheese, jams and herbs. The caraway rolls are to die for!

Lake Kussharo
These whooper swans breed in northern Siberia and spend the Winter in Hokkaido. Lake Kussharo is mostly frozen however in certain places along the edge of the lake, geothermal springs prevent any ice from forming. It was very atmospheric and one of my favourite places in Japan.

I've heard that whoper swans are also called the "angels of winter" and it was amazing to see these beautiful birds paddling in the warm waters along the sandy beach. The swans were actually quite tame so you could walk right up to them and they were in no way startled. It was certainly an ethereal heaven for me - a moment in time I will always treasure. 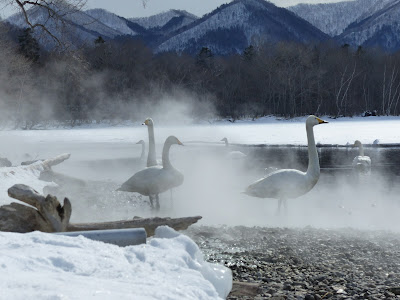 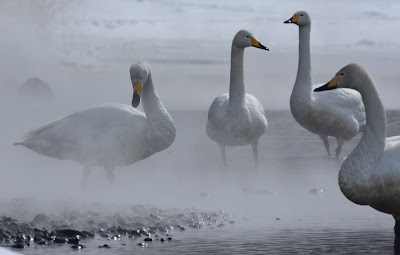 In the next photo, the whooper swan is obscured by the rising steam but I think it makes for a great atmospheric shot. 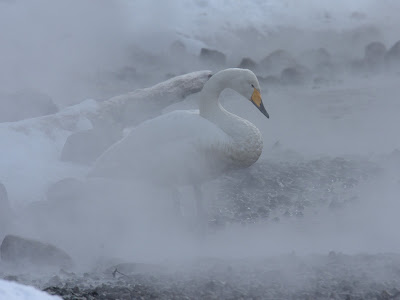 Yoroushi
I made visit to Yoroushi as I'd heard all about the Blakiston's fish-owls.  Yoroushi is inland and a very picturesque small village with a hot spring. It was however very cold and several of the roads were closed due to the amount of snow. Yes, just like back home in Northumberland! 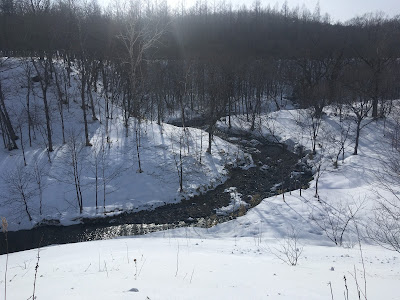 The Blakiston fish-owl is the heaviest owl in the world and very rare, with only about 300 left in Hokkaido although there are also some in Eastern Siberia.

The Youroushi onsen is a traditional Japanese hotel and here they put fish from the kitchens into a small pool to attract the owl. The owl is a regular visitor however you do need to be patient as you have no idea whether it will come at 10pm or 4am so if you go, you have to be prepared to wait up all night.  There is however a comfortable lounge and viewing area and the pool is just a few metres from the window. 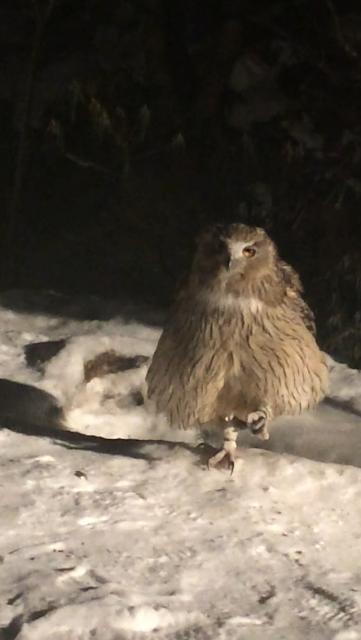 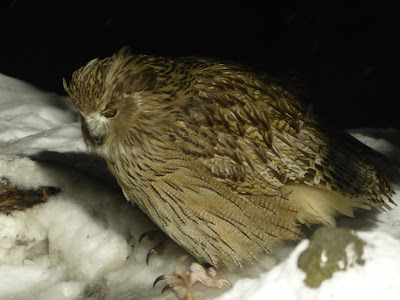 Although it was marvellous to see the fish-owl, the visitor below was totally unexpected and actually much more exciting as it wasn't coming to feed on a 'feeder'. It was very difficult to get a decent photo in the dark as it was in the trees on the opposite side of the stream. This is a Ural owl - much smaller than the Blakiston's. If you look carefully, you can see it has a long tail extending below the branch and according to one bird guide, "a deceptively gentle face"!


Amongst all the excitement of the owls, a Japanese sable appeared looking for a free fish supper! This is a screenshot from the video taken with my iPhone! 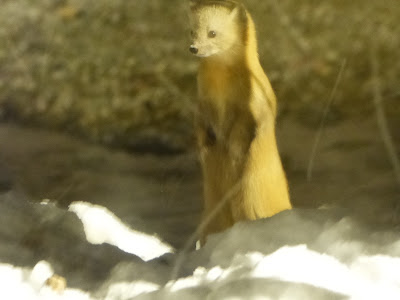 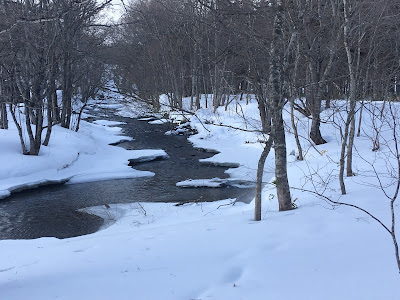 Steller's sea eagles are native to eastern Russia and only breed in Kamchatka and the Russian side of the Sea of Okhotsk. In the Winter, many move south to Hokkaido and along with white-tailed eagles, they hunt for cod in the Nemuro Straits, Hokkaido.


At Lake Furen, the locals take a sledge laden with fish out over the ice at 9am every morning. For just 1000 yen (£6.50) you can stand by the fenced off area to watch them. It was an amazing sight to see so many eagles at close range, giving you plenty of photo opportunities. 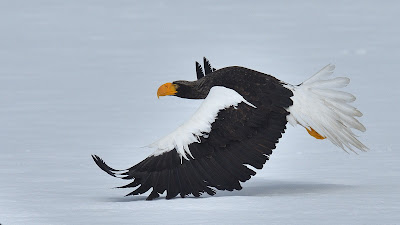 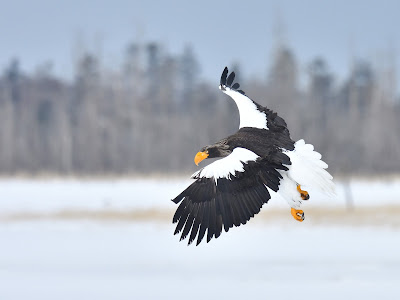 Amongst the Steller's, there were also numerous white-tailed eagles and black kites eager to get a bite to eat. The Steller's are absolutely huge with a wingspan of 2 to 2.5 metres and can easily be identified with their distinctive yellow beaks.


In the second photo below I have made a collage up featuring coastal harbours in north-eastern Hokkaido. The harbours which remained unfrozen attracted ducks including red-breasted merganser, scaup, black scoter and Harlequin duck. 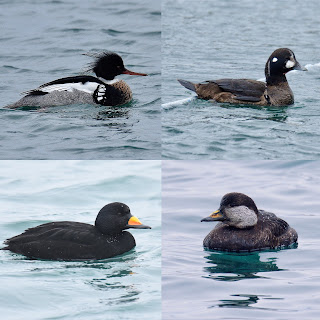 
There weren't many birds to be seen at Nemuro harbour (bottom right) as it was frozen over. The ship you can see is ice-bound! Such amazing sights.. 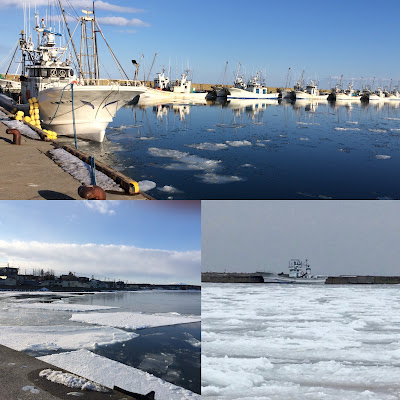 Finally, here are a couple of pics of the Otowa river where the red-necked cranes roost. It was only minus 17C but definitely worth getting up early for to watch the cranes get ready fly off as the sun rose. 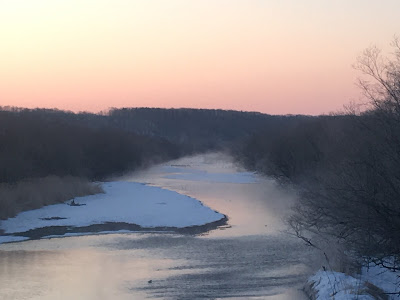 Then, back to 'Heart'n Tree', nestled on a hill in Tsuirio, for a delicious Japanese breakfast.